The prophet Elijah (Elias) said that the Lord was going to take him to heaven that day. Elisha, 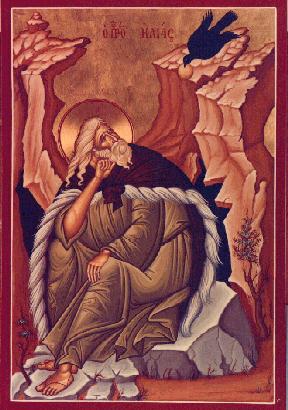 who was with him, insisted on staying with him until the end and asked for a double share of Elijah’s spirit of prophecy before he would be taken. Elijah used his cloak to divide the waters of the Jordan River and they crossed it. Elijah said to Elisha, if you see me part from you and ascend into heaven, your wish will be granted. As they walked along, a whirlwind separated them and Elisha saw Elijah ascend in a Chariot of Fire. In the icon, we see Elijah passing his mantle to Elisha, who afterwards used it to separate the waters of the Jordan River again. This showed that he had received Elijah’s spirit of prophecy. Tradition says that they stayed in the cave depicted before they crossed the Jordan.
The parish building was dedicated to the prophet St. Elias on the day of his feast, July 20, 1969. It was a happy coincidence that it was the same day as the first landing on the moon. The symbolism of fiery chariots ascending to the heavens was not lost on the community! Symbolism aside, this parish prays that, as we dedicate ourselves to him, his spirit of prophecy will continue with us as well.

Because Elijah did not die the death of a mortal but was elevated to Heaven by the hand of God, he is venerated as a saint who was a prefiguration either of Jesus Christ or of St. John the Baptist, a point which can be debated but leaves no doubt that Elijah was a man of God much as the mighty Moses. Known as Elias in the Greek and King James versions of the New Testament, Elijah was a major prophet of God who lived in the eighth century B.C. and hailed from Tishbe of Gilead during the reigns of Ahaziah and Ahab, the latter an idolater whom he vehemently denounced.
The worship of one God had weakened considerably among the tribes of Israel and was further debilitated when the worship of the god Baal was introduced by Jezebel, the wife of Ahab. Jezebel brought forth a procession of idolatrous priests and erected temples to Baal, a god of nature supposedly with greater power than even the omnipotent (All-Powerful) God of Moses. Elijah stormed against the evils of the priests of Baal, who were contaminating the pure worship of God and demoralising the land with their illusions and deceptions and whose princess, Jezebel, was a malefactor of monstrous proportions. He fought the Canaanite god Baal at every turn and strove to revitalise the belief in the one God of the universe, preaching with, an eloquence and passion to those whose faith had waned and bringing many strays back into the fold. He discredited the false prophets of Baal, who turned to the crafty Jezebel for reinforcements and the influence of the throne to turn the tables on this man of God.
Jezebel intensified her efforts to disprove Elijah, who had correctly predicted a three-year drought which ravaged the land, ruining the crops and decimating the herds. He greeted this renewed assembly of priests of Baal with a derisive challenge to test the powers of God and those of Baal, a challenge which the haughty queen accepted, much to her later regret.
The test to decide which was the greater comprised a placing of sacrifices at two altars, one to Baal and the other to God. When all was in readiness each side would call for fire to be ignited, the winner being the one whose fire lit first.
Queen Jezebel herself appeared at the altar of Baal, and her priests were given the first opportunity to call forth the power to light the fire. They appealed to Baal, first in a reverent tone and then with increasing irritation until at last they gave up in disgust. Then the patient Elijah stepped forward and at his first prayer the fire burst forth, following which the onlookers, realising the truth at last, swooped down on the false priests and killed them all.
A further demonstration of the power of the Lord came when Elijah called for an end to the drought and a heavenly rain descended, ending a three-year dry spell that had parched the land.
Thereafter Elijah went to Mt. Sinai, where God had spoken to Moses, and on that holy spot he heard the words of God just as Moses had. He descended with instructions from God himself, among which was the instruction to appoint as his successor a man named Elisha, who later became a prophet of God in his own right. Elijah discovered that God was not necessarily a clap of thunder, a bolt of lightning, or a rumble in the hills, but he could be “a still, small voice”.
Elijah stood up to King Ahab and Queen Jezebel on many questions other than the worship of false gods, on one occasion daring to challenge the right of kings to do anything they chose without being guilty. This immunity from God’s law was used to seize the vineyards of Naboth, killing the owner in the process. Elijah dared to tell him that he was not above God’s law and would, therefore, be punished by the Lord.
Elijah is revered as a Saint in the Orthodox Church and is commemorated on July 20.